For over four decades, The Hand Prop Room has been dedicated to providing the finest merchandise and exceptional service to all of our clients.

We have always maintained certain guiding principles: Accurate research, authenticity and our willingness to search from one end of the globe to the other to find exactly what our customers require. If we don’t have it, we’ll find it. If it doesn’t exist, we’ll make it!

We have remained at the forefront of the industry because of our ability to function as a full-service facility. From over 1,000,000 props on hand in our rental department, to our exciting and creative graphics department, along with our custom manufacturing facility and a fully outfitted arsenal, we are able to service any type of production with any type of budget. We welcome the excitement new and challenging productions offer.

The HPR Graphics Department has grown consistently since its inception, culminating in the 2006 move to our own facilities across the street from the main prop house. With a full team of project managers, designers, and a dedicated production crew, our department is large enough to handle any job but small enough to still provide one-on-one attention to every client. This “boutique” approach has enabled us to offer individualized and flexible service.

At HPR Graphics, one person will shepherd your entire project from order to completion to ensure that you get exactly what you ask for. All the project managers on staff are trained designers who pride themselves on their attention to detail and their ability to solve problems quickly and effectively. There are no “middle-person” salespeople in the department. Your project manager will not only oversee your order, but will also be personally involved in design and production, make necessary purchases, do your billing and even pack your items for shipping.

We value our relationships with clients; you will often be able to work with the same project manager as you move from project to project. The better we get to know you, the better we are able to give you exactly what you want.

In addition to our hundreds of stock items, we can design anything for your specific needs. We are thorough in our approach to research and design. If we can’t fabricate it in-house, we’ll find someone who can. We understand time constraints and will deliver professional products on deadline.

The designers and project managers in the graphics department have diverse backgrounds. We have studied art, graphic design, film production, production design, journalism and screenwriting. We have real world experience working on newspapers and magazines, designing posters and album art, creating product packaging, stationary, logos, and much more. Our varied experience helps us add those real-world details that elevate your props from ordinary to extraordinary.

From concept to completion, HPR Custom delivers! We have state-of-the-art equipment and a brilliant fabrication team.

No job is too big or too small. You name it, we can manufacture it! We specialize in CNC machining, 3D printing, state-of-the-art rapid prototyping machines we’re constantly upgrading to reflect ever-changing technology, welding, metal work, woodworking, custom electronics, silicone molding, roto casting, metal casting, sculpting, laser engraving and much, much more.

We can give you the best finished product for the best price. Give us a call and let us take the pain out of your next prop fabrication job. 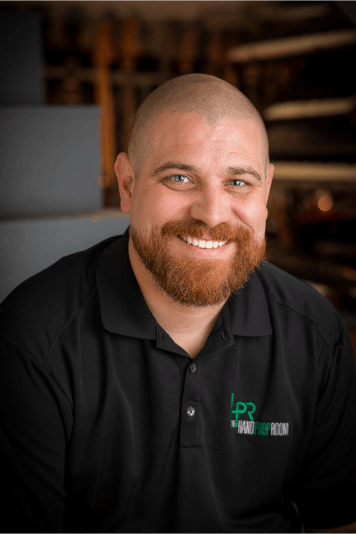 Nathan has been with The Hand Prop Room since 1996. He started at the age of 15, working part-time in the summer while still in high school.

Once Nathan graduated, he became a full-time HPR employee. His determination and hard work, along with his research skills and ability to multitask, were key to him becoming Floor Manager, General Manager, and most recently, Executive Assistant.

Nathan’s mother and father both hail from the film industry. Prior to retiring, Nathan’s father, Terry Haskell, was a highly sought-after prop master and had a long, rewarding career. His mother, Nancy Cone, was a wardrobe stylist and costume designer who has worked on such films as A Few Good Men, G.I. Jane and Interview With A Vampire. It’s no wonder Nathan is so good at what he does. It’s in his blood!

When not at HPR, Nathan is busy hosting a local podcast as well as being an underground hip hop artist. He’s also a die-hard Clipper, Dodger and Packers fan.

Rey has been with The Hand Prop Room since 2002. He started in our Returns Department, where he quickly became manager. Shortly thereafter, Rey transitioned to our sales team, eventually becoming Sales Manager and achieving a recent promotion to General Manager.

Rey carries a Dangerous Goods Permit and handles all of our dangerous goods shipping.

Rey is passionate about the research part of his job. He loves diving into a specific event or time period. He also prides himself on doing the best job possible for his clients. His biggest reward is seeing props he helped procure on the big screen.

In his spare time, Rey likes to hike, relax, take in a movie, go to new restaurants and sample new foods. 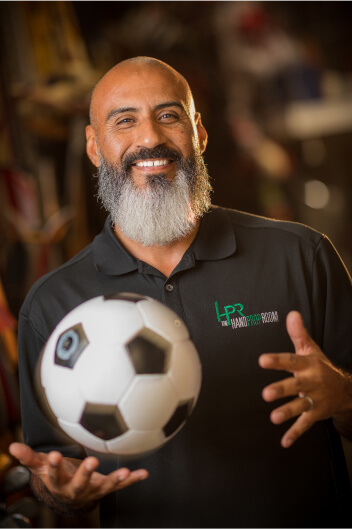 Frank joined The Hand Prop Room in 2000 in our Returns Department. Since then, he has enjoyed being part of a team dedicated to growing the business into an innovative and creative prop house.

Frank loves the challenges and creativity that comes with his job. He thrives on learning from his clients.

Frank attended El Camino College and lives in Southeast Los Angeles with his family. In his spare time, he enjoys playing soccer, taking road trips and exploring new eateries with his wife and children. 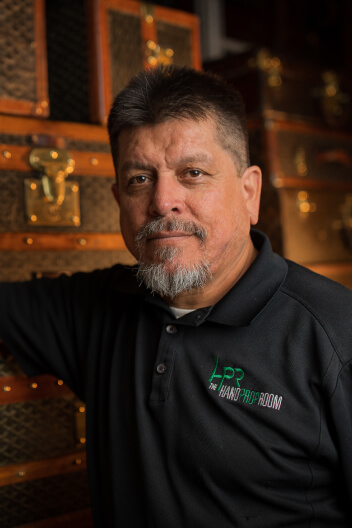 Luis has been with us since 1990! As with many of our sales staff, Luis started in the Returns Department, where he worked for 3 years before deciding to move up into sales.

Luis quickly realized he had a passion for antique items and soon became the go-to for many clients working on period projects. Luis has a vast knowledge of the Civil War period as well as many other eras.

Luis is very passionate about the history of many props at The Hand Prop Room, including their use on and off screen.

In his spare time, Luis likes to spend time with family, watching sports and cooking shows. 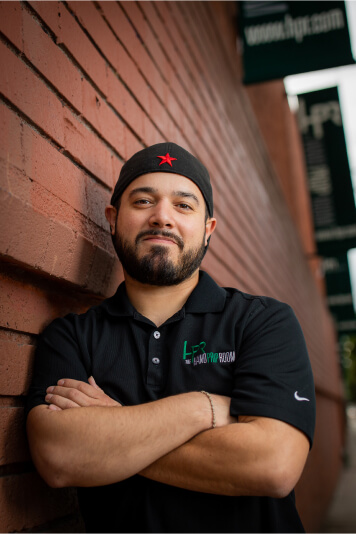 Remo started at HPR in 2013. He worked with us as an intern while getting his AA Degree in Film Production. Remo also holds a Broadcasting Degree from the Connecticut School of Broadcasting.

Remo did such a great job and showed so much potential while interning, he was asked to join our sales team full time. Despite his relatively shorter time on staff, Remo can break down, research and pull together a show like any seasoned veteran.

When Remo is not juggling multiple orders at HPR, he loves to spend time with his children. He’s also very passionate about film and its storied history. He loves to go to the movies and discover old and new theaters. 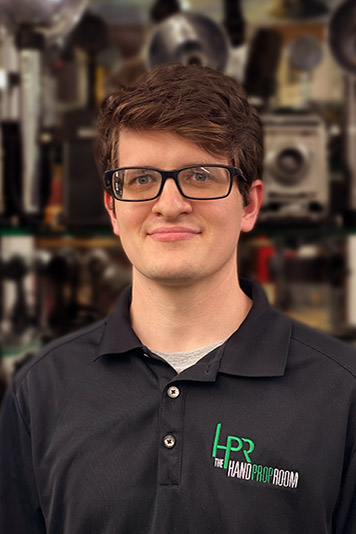 The newest member of our sales team, Anthony was born and raised on the East Coast. He moved to Los Angeles in 2021 with the hopes of working in the movie industry. He got his wish when he started in the HPR Returns Department and was recently elevated to sales.

In his spare time, Anthony likes to write scripts. He is also a huge fan of buddy cop movies.